Airwave’s Ultimate Sound Pack 2023 is made for every producer wanting to get his hands on Airwave’s own sounds. Known for his contributions to bxOberhausen, Knifonium, and two major Korg Synthesizers, modwave and wavestate, Belgium based Airwave needs no introduction for any electronic music enthusiast;  Here’s your chance to use the entirety of the man’s sound palette into your own productions, all sounds in a single, comprehensive, and affordable package.

With over 1000 productions under his belt, a huge background as an electronic music insider, and over 25 years of music creation, Airwave’s music has been heard all around the world. Same can be said about his sounds, featured now on several hardware and software products on the market.

Known for his twisted atmospheres and creative manipulation, Airwave’s Ultimate SoundPack just shows how extensive a musician’s own library has become after years of twisting knobs and playing with sounds for more than a quarter-century.

Ultimate SoundPack can’t be pigeonholed in a single sub-genre and focuses on recreating the artist’s own vision instead, spanning all BPM ranges and open to all genres.

A whopping 7.9Gb  Soundpack with more than 1700 Drumloops, an extensive array of One-shots, and memorable Textures to instantly add depth to any kind of electronic music production.  On top of that, Airwave’s ENTIRE synth preset collection, featuring all 4 of his infamous  Omnisphere packs, 180+ presets for Serum, an EDM champion of soft synthesizers, featuring an extensive palette of never-heard before sounds making use of the entire modulation slot list.

With a fresh and updated approach, Airwave Ultimate SoundPack will get yearly updates guaranteed, updates that will see the amount of content grow significantly with each new version, starting expansion towards other software synthesizers for the preset part, and featuring more acoustic recording and heavy sound design. 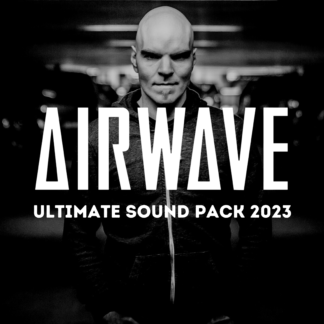